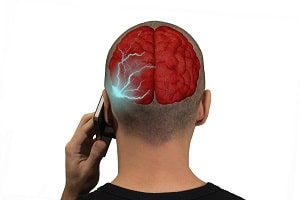 “Can you hear me now?” You’ve probably heard the question before on a glitchy cell phone call. But there’s something else you need to hear. Cell phone use may increase your risk for health problems.

Smart phone technology is still relatively new. But some research suggests prolonged smart phone use and exposure to radio frequency (RF) energy may increase the risk for:1

What is radio frequency energy?
It’s the energy that travels through the air from a device or tower to your smart phone. Your phone receives RF signals. It also emits RF energy when you’re using the Internet or Bluetooth connections.

Your body absorbs RF energy.  Too much of it, may be a problem.

How much time do you spend on a smart phone?

That’s pretty much everybody. An estimated 96 percent of all adults own a cell phone or smart phone.4  Younger smart phone users tend to spend even more time on phones.

And the more time you spend on a smart phone, the higher your exposure to RF energy.

Let’s face it. If you’re a smart phone user, chances are pretty good it’s a lifeline for work, family, entertainment, shopping, directions, and more. And that probably isn’t going to change. But there are some things you can do to reduce your exposure to RF energy to protect your health.

Research about health risks linked to smart phone use remain mixed. But there’s enough evidence to suggest reducing your exposure to RF energy is a smart move. “Can you hear me now?”

We are sorry that this post was not useful for you!

If you have any questions, feel free to contact us